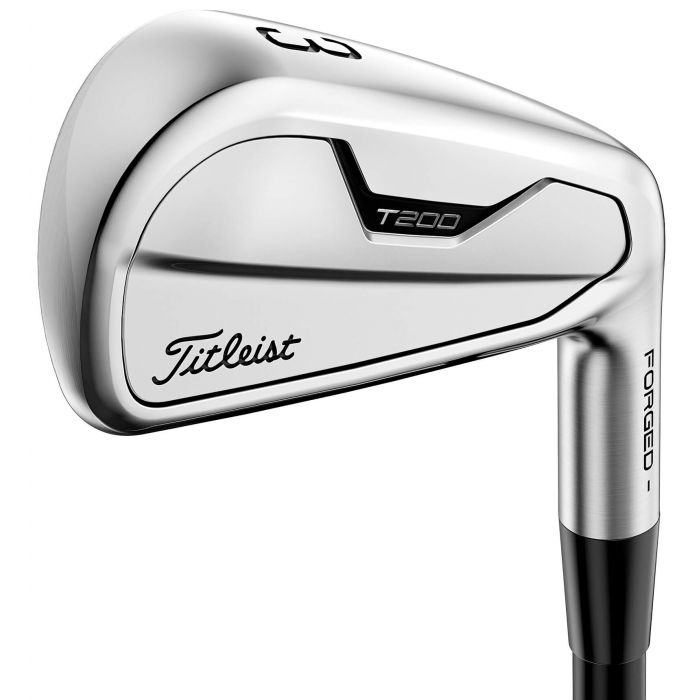 The Titleist T200 Utility Irons are specifically designed to add some punch to your long iron play, without sacrificing the precise control demanded by the world's best players.  The T200's perfectly compliment their T100 and T100•S siblings, and it's obvious Titleist envisioned set blending because all three share the same minimal offset design.

The T200 Utility Irons are no different than the absolute R&D standout T200 Irons.  The irons feature streamlined Max Impact technology with an enhanced polymer core that preserves ball speed on off-center strikes and improves mass efficiency at impact.  Max Impact is buoyed in strength by a forged L-Face insert that generates a high coefficient of restitution, which simply put, means the ball explodes off the club face.

As helpful as distance can be, especially in the modern game, it's nothing without precision.  Titleist thought outside the box, and found the key to distance control in the aerospace construction industry.  Denser D18 tungsten and a 2000 degree brazing process allowed Titleist's engineers to locate the center of gravity with pinpoint exactness.  In addition to increasing accuracy and MOI, the CG creates fast, high launching long irons.

When selecting the premium shaft offerings for the T200 Utility Irons, Titleist elected to go exclusively with Graphite Design.  Both the Tour AD-DI and Tour AD-IZ Hybrid shafts unlock best in class speed and launch, making the irons even more desirable.

If you need more proof that the T200 Utility Irons seamlessly blend speed, forgiveness and control, look no further than the bags of Jordan Spieth, Will Zalatoris and Cameron Smith.